The original rhyme dates back to the 18th century and different numbers of verses were later added, each with variations in the wording. Throughout the 19th century new versions of the story were written featuring different incidents. A number of theories continue to be advanced to explain the rhyme’s historical origin.

The phrase “Jack and Jill” existed earlier in England to indicate a boy and girl as a generic pair. It is so used, for example, in the proverb “Every Jack (shall/must) have his Jill”, to which there are references in two plays by William Shakespeare dating from the 1590s. The compress of vinegar and brown paper to which Jack resorted after his fall was a common home cure used to heal bruises.

A musical arrangement of the rhyme  Charles Burney was published in 1777.  But the melody commonly associated with the rhyme was first recorded with the three stanza version by the composer and nursery lore collector James William Elliott in his National Nursery Rhymes and Nursery Songs  in 1870.
(Source: Wikipedia)

Jack And Jill  is a great song for children to feel and perform the beat in 6/8 time.

Younger children love to act out the song. One group can sing the song whilst another group/pair does the acting of the lyrics. 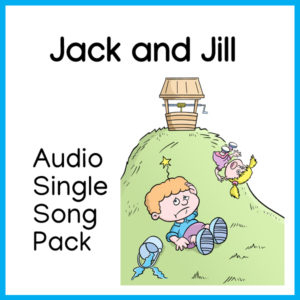 Jack And Jill is also available as an Audio Single Song product for only $1.

Click on this link to go to Jack And Jill Single Song.