London Bridge Is Falling Down

London Bridge Is Falling Down is also known as “My Fair Lady” is a traditional English Nursery Rhyme and Circle Singing Game, which has different versions all over the world.

It could date back to the late Middle Ages, but the earliest records are from the 17th Century.

Modern lyrics were first printed in the mid 18th Century and became popular, particularly in Britain and USA, during the 19th Century.
(Source: Wikipedia)

London Bridge Is Falling Down

London Bridge is falling down, my fair lady.

Children form a circle of at least 5 or 6 children. Two children are chosen to be up as the “bridge.

”These two children stand and face each other, make an arch holding their arms up in the air and connecting the palms of their hands together.

The rest of the circle then walk and pass under the arch, one by one, in a single line, in a circle.

When the last word of the verse is sung, (“my fair lady”) the two “arches” have to capture one child by dropping their arms down and capturing one child.”

There are many different versions of what happens next:-

With young children, parents can make this a lap song, where they bounce the child on their lap and then fall backwards on the last phrase.

Alternatively, the child could simply walk around the parent, seated on the floor and the parent “hugs” the child on the last phrase or word. 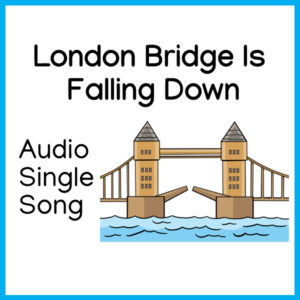 If you like this product, please leave a review in the Reviews section, right next to the Description tab above.

London Bridge Is Falling Down is also available as a SINGLE SONG PACK with the following contents:

Click on this link to go to London Bridge Is Falling Down Single Song Pack.