This Old Man is an English language children’s song, counting and nursery rhyme

The origins of this song are obscure. The earliest extant record is a version noted in Anne Gilchrist’s Journal of the English Folk Dance and Song Society (1937).

Nicholas Monsarrat (1910–1979), in his autobiography, refers to the song as being ‘a Liverpool song’.  It was collected several times in England in the early 20th century with a variety of lyrics.

In 1948 it was included by Pete Seeger and Ruth Crawford in their American Folk Songs for Children and recorded by Seeger in 1953.

It received a boost in popularity when it was adapted for the film The Inn of the Sixth Happiness (1958) by composer Malcolm Arnold as “The Children’s Marching Song”, which led to hit singles for Cyril Stapleton and Mitch Miller, both versions making the Top 40.
(Source: Wikipedia) 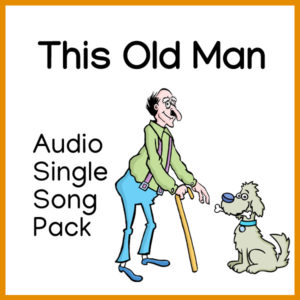 This Old Man is also available as an Audio Single Song product for only $1.

Click on this link to go to This Old Man Single Song.

Be the first to review “This Old Man (2)” Cancel Reply