The Grand Old Duke Of York (2)

The Grand Old Duke Of York (2)

The Grand Old Duke Of York (also sung as “The Noble Duke of York”) is an English children’s nursery rhyme, often performed as an action song.
(Source: Wikipedia)

There has been argument about which Duke the song is referring to in history and there are a number of bearers of that title that would qualify, particularly Prince Frederick, Duke of York and Albany (1763–1827). Its lyrics have become proverbial for futile action.

Like many popular nursery rhymes the origins of the song have been much debated and remain unclear.

The lyrics were not printed in their modern form until relatively recently, in 1913.

Prior to that a number of alternatives have been found including a note that in Warwickshire in 1892 the song was sung of both the Duke of York and the King of France; from 1894 that it was sung of Napoleon.

The oldest version of the song that survives is from 1642, under the title ‘Old Tarlton’s song’, attributed   to the stage clown Richard Tarlton (1530–1588) with the lyrics:

The King of France with forty thousand men,
Came up a hill and so came downe againe.

There are many different versions of the melody. Many begin with the anacrusis “Oh the Grand…”

I have decided to simplify it, by simply starting the song with “The Grand…”

I have also simplified the melodic line, to make it more suitable for young children.

The tone range is s, d r m f which is not a wide range at all, and therefore suitable for young children.

The main feature of the song is that it is a marching song and children can march to the beat and make up actions that act out the lyrics. For example they can stand on the word “up” and sit down on the word “down” and do a ‘half crouch’ for “halfway.”

Learning to march helps children with their right and left brain  coordination and physical coordination. Children can also learn to march on the spot. 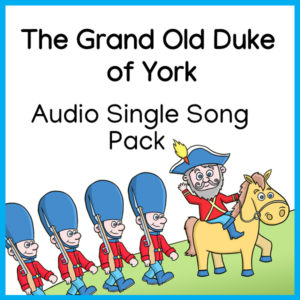 The Grand Old Duke Of York is also available as an Audio Single Song product for only $1.

Click on this link to go to The Grand Old Duke Of York Single Song.